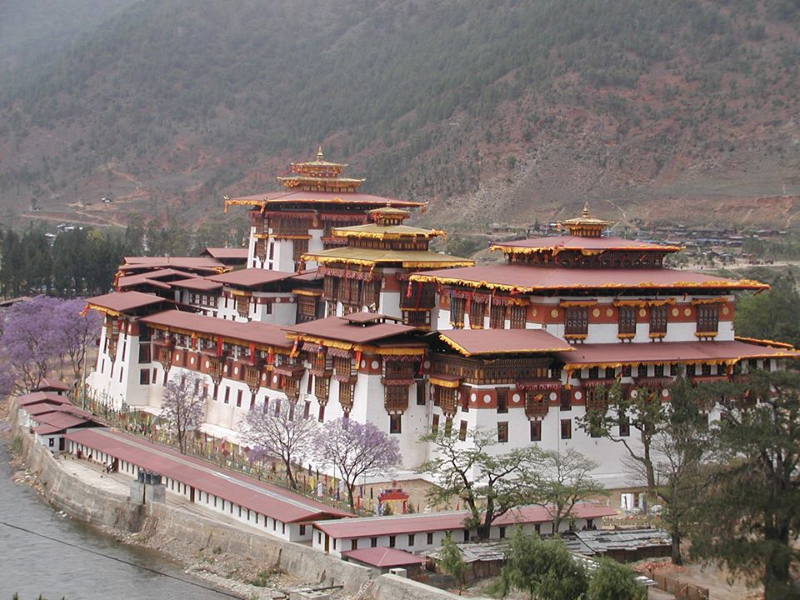 The Punakha Tshechu, as all Tshechu festivals, honors Padmasambhawa, also known as Guru Rimpoche, the precious yogi and saint who is known to have introduced Tantric Buddhism throughout the Himalayas. The festival’s masked dances are performed by monks dressed in colorful brocade attire and permeated by chants and reading of Buddhist scripts. The culmination of festival constitutes the unfolding of a huge cloth thangka, a sacred scroll, depicting Padmasmabhawa and imagery from Buddhist pantheon.

Heritage Museum – Dedicated to connecting people to the Bhutanese rural past though exhibition of artifacts used in rural households.

National Memorial Chorten – Which was built in honor of the late King Jigme Dorji Wangchuk.

Day Trek to Tango Goemba and picnic/lunch by river in the afternoon. The Tango Goemba site has had religious significance since the 12th century when it was the home of the Lama who brought the Drukpa Kagyupa school of Buddhism to Bhutan. The monastery was built there in the 15th century by Drukpa Kunley (“The Divine Madman”). Tango is the highest centre of Buddhist learning in the country; almost every Je Khenpo (religious head of Bhutan) completed the 9-year program there. After completing that program, monks traditionally spend 3 years, 3 months and 3 days in mediation at the nearby Cheri Goemba retreat, built in 1619 by Shabdrung Ngawang Namgyal, the founder or first unifier of Bhutan. It is currently the home of an 11-year-old boy believed to be the seventh reincarnation of the fourth desi of Bhutan.

Centenary Farmers’ Market – Every Saturday and Sunday villagers from the valley and other nearby places come to sell their organic agriculture products.

Punakha Dzong– Built in 1637, the dzong continues to be the winter home for the clergy, headed by the Chief Abbott, the Je Khenpo. It is a stunning example of Bhutanese architecture, sitting at the fork of two rivers, portraying the image of a medieval city from a distance. The dzong is a fine example of Bhutanese craftsmanship.

Khamsum Yulley Namgyal Chorten– Built by the third Queen Mother Ashi Tshering Yangdon wangchuck this Chorten is a splendid example of the Bhutanese architecture and art and is the only one of its kind in the world. It has been built over eight and a half years and its details have been drawn from religious scripture.

In the morning, we would start our drive to Central Bhutan. Before we start we will pay a visit to Chhimi Lhakhang- A 20 minutes walk across terraced fields through the village of Sopsokha from the roadside to the small temple located on a hillock in the centre of the valley below Metshina. Ngawang Chogyel built the temple in 15th century after the ’Divine Madman’ Drukpa Kuenlay built a small chorten there. It is a pilgrim site for barren women.

Travel to Wangdue- one of the major towns and district capital of Western Bhutan. Located south of Punakha, Wangdue is the last town before central Bhutan. The district is famous for its fine bamboo work and its slate and stone carving.

We will pause to view the Wangdue Phodrang Dzong. Built in 1638, Wangdue Dzong is perched on the spur of a hill and overlooks the Tsang Chu and Dang Chu rivers.

This is one of the most spectacular valleys in Bhutan and also the heartland of Buddhism in Bhutan. It is an area with a wide variety of fauna and flora. The Guru Rinpoche and his lineage of Tertons (treasure finders) making Bumthang his home have led to more than 40 temples being built in this peaceful valley.

In the morning, we will hike to the Tamshing Goemba, built in 1501 by the Buddhist saint Pema Lingpa. We will also visit Kurjey Lhakhang(left-bottom), one of the most sacred monasteries in Bhutan. Built by the Guru Rinpoche in 1652, it houses a rock with his body imprint. Legend has it that Guru Rimpoche manifested as a Garuda to defeat the demon Shelging Karpo who had taken the form of a white lion.

We will also visit Jambay Lhakhang, built in 659 by Tibetan King Sontsen Gampo to pin down a demoness who was obstructing the spread of Buddhism. Come October, the Jambay Lhakhang Drup is one of the most colourful festivals in Bhutan.

Jakar Dzong- pitched on a high ground overlooking the town junction, it was built as monastery in 1549 by the great grandfather of the Zhabdrung. It is now used as the administrative center for Bumthang district

In the afternoon, we will hike up toThangbi Valley, crossing a suspension bridge to visit theThangbi Lhakhang built in the 14th century via an unpaved road.

On route to Gangtey is Trongsa, the ancestral home of the ruling dynasty.

Travel to Trongsa- literally “New Town” in the Dzongkha language, is where the current monarchy had its origin in Bhutan. Each King in the line of succession has held the post of Trongsa Penlop or Governor before donning the Raven Crown.

Trongsa Dzong– The foundations of Trongsa Dzong were laid in the 16th century by by Pema Lingpa. The Dzong flourished during the 17th century under Shabdrung Ngwang Namgyal. With its massive structure, its wall looming high above the winding Mangde Chu Valley, the Dzong commands the east-west road.

Taa Dzong– Built as a watchtower the Taa Dzong has since been turned into a Heritage Museum. A book on this prominent Dzong is written by Christian Schicklgruber entitled The Tower of Trongsa, Religion and Power in Bhutan.

The Valley of Phobjikha is well known as the winter home of the Black necked crane (Grus Nigricollis). Bhutan is home to around six hundred black-necked cranes with Phobjikha being one of the popular places that the birds migrate to in the winter months from the Tibetan plateau. The elegant and shy birds can be observed from early November to end of March.

Another significant landmark in Phobjikha is the famous Gangtey Gompa monastery. This is an old monastery that dates back to 17th century.

Paro Dzong also known as Rinpung Dzong, this 15th century massive fortress/monastery, is also the administrative center of the dzonkhag.

Ta Dzong – Built as a watchtower, it was converted into the National Museum in 1968. The museum houses antique Thangka, textiles, weapons and armour, household objects and rich assortment of natural and historic artifacts.

Drukgyal Dzong – Built in 1647 by the great Shabdrung Ngawang Namgyal, father and unifier of medieval Bhutan. The Dzong was destroyed by an accidental fire and left in ruins as an evocative reminder of the great victories it was built to commemorate. Explore the ramparts and relive the memories of a glorious past.

Taktsang Monastery– A one hour hike to the cafeteria is also a vantage view whereby you can enjoy the stunning view of the monastery. Prayer flags adorn the cliffs and this is also where Guru Padmasambhava landed on the back of a tigress in the 8th century.